Last time, we talked to Namiko Amano, a veteran embryologist at Oak Sumiyoshi Obstetrics and Gynecology. This time, we will focus on the work of embryology specialists, which patients rarely see, especially the work in the culture room.

Working in the Culture Room

From the Start of Culture

In a nutshell, the job of an embryo cultivator is to take care of the embryo (fertilized egg). The culture process begins when the doctor receives the collected eggs.
Oocytes arrive in the culture room floating in a liquid called follicular fluid. We observe them under a microscope and perform pre-culture for several hours, during which time sperm is also prepared. Generally, sperm are collected on the day of egg collection. Frozen sperm may also be used.
In either case, the sperm is washed to remove white blood cells, germs, etc., and collect only motile sperm.

In IVF, sperm is washed and sprinkled on the egg and cultured. Since the egg is surrounded by cells called cumulus cells, many sperm swim toward the egg all at once, releasing an enzyme called hyalonidase from the sperm head to dissolve the cumulus cells.
Fertilization is established when the first sperm that passes through the zona pellucida (egg shell) enters the egg cytoplasm.
In the case of intracytoplasmic sperm injection, the cumulus cells that cover the egg are removed in order to insert the sperm into the egg by inserting a needle. The lab staff “catch” a single strong, active sperm in the sample by pressing on the tail with a specialized type of needle, and friction is applied. This not only makes the sperm easier to handle, but also releases substances that activate the egg, increasing the fertilization rate.
The immobilized sperm is aspirated with a needle, the egg is pierced, and the sperm is injected into the egg cytoplasm.

The environment outside the incubator is stressful for the egg, so the entire process from selecting sperm to injecting it into the egg is typically performed in under a minute or two. 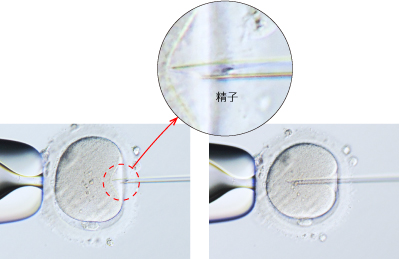 Observation and Grading of Oocytes & Embryos

We observe eggs and embryos every day at our hospital. Fertilization is confirmed the day after egg collection. Fertilized eggs usually have two pronuclei.
The pronucleus disappears after a while and cell division of the fertilized egg begins. As a result, there is a brief window between when the pronuclei disappear and when the cell division begins when the egg may appear unfertilized! A fertilized egg that has begun cell division is called an embryo.
Embryos develop by repeating cell division and become blastocysts around the 5th day. There are criteria for each early embryo and blastocyst, and the grade is determined according to those criteria.
Early embryos use an evaluation method called "Veek classification". The Veek classification is based on the number and size of cells and the amount of fragments (cell debris generated during division).
The number of cells is expressed as a stage, and the size of cells and the number of fragments are expressed as grades. The grade is evaluated as 1 for the best grade as 1 for the uniform cell size and the smaller amount of fragments. For example: 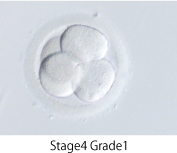 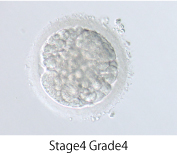 On the other hand, blastocysts use the "Gardner classification". We evaluate a combination of growth rate and cell quantity.
The Gardner classification is written as "3BB", for example, but this number indicates the growth rate, and the higher the growth, the larger the number.
The letter next to the number is the evaluation of the cells. The letter on the left is the inner cell mass (the part that becomes the fetus) and the right is the trophectoderm (the part that becomes the placenta).
On a three-point scale of A, B, and C, those with many even cells are judged as A, and those with few and uneven cells are judged as C. 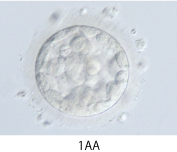 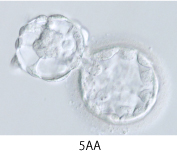 Usually, embryo transfer or freezing is performed by selecting embryos in good condition at the decided upon time.
Blastocysts have a higher implantation rate than early embryos because they can exclude embryos that stop growing in the middle, so our default choice is to culture until the 5th day.
However, slow-growing embryos may not become blastocysts on the 5th day.
Since some slow-growing embryos can occasionally implant, at our hospital, we also select embryos which are very nearly blastocysts. The boundary is if our lab staff have seen their progress and believe they are likely to complete the transition. If you want to transplant and freeze only full blastocysts, continue culturing until the 6th to 7th day.
If you have any requests during the time of transplantation or freezing, please consult your doctor at the time of examination.

When handling eggs and sperm, the patient's name and medical examination ticket number are written on the containers and instruments used, and in addition to multiple confirmations by the incubator in all processes, a barcode reader confirms. This allows for a thorough double check and triple check. In addition to measures against mistakes, we have taken strict safety measures and management systems, such as assigning unique numbers to eggs and managing them individually, and managing culture records with an IT system developed in-house.

There are some things to keep in mind when performing fertility treatment. The younger the age at the time of egg collection, the higher the pregnancy rate.
Unfortunately, transplanting even a good-grade embryo in perfect condition does not always lead to pregnancy.
Many non-implantations and miscarriages are caused by chromosomal abnormalities in the embryo, and the probability of chromosomal abnormalities increases with age. Those who are considering stepping up to in vitro fertilization and those who have already undergone in vitro fertilization may have their own concerns and anxieties.