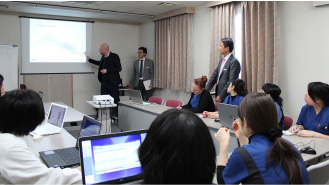 At the Oak Group, we collect information on ART (Assisted Reproductive Technology) related technologies and products that are advancing every day, and we are trying to introduce better ones.

On this day, a hearing session for new products related to embryo freezing by ORIGIO was held with the participation of doctors and embryo culture specialists. After the product explanation by the senior product manager from the head office (USA), a lively question and answer session was held in order to resolve unclear points and gain deeper knowledge.

Does a frozen embryo transfer ameliorate the effect of elevated progesterone seen in fresh transfer cycles?
Fertility and Sterility, in press

One of the causes is that luteal phase begins early to induce ovulation during fresh embryo transfer.

The luteal hormone (progesterone) is measured at the time of triggering for egg collection (injection or nasal spray given 36 hours before), and if the value is high, it is considered that luteal phase has started. In that case, it is known that the implantation rate of embryos in the same cycle deteriorates.

Regarding the adverse effects of the rapid rise of progesterone, it is said that the quality of embryos collected in that cycle is lowered and the receptivity of the endometrium is lowered.

However, if it has an adverse effect on the embryo, the eggs collected in that cycle should also have a lower implantation rate and pregnancy rate even if a thawed embryo is transferred later.
The authors investigated the pregnancy rate when the fertilized eggs were thawed and embryo-transferred during the fresh cycle and the subsequent hormone replacement cycle. It was found that high progesterone levels reduce the implantation rate in the fresh cycle, but not the implantation rate in thawed embryo transfer. It was also found that the effect is remarkable when the progesterone level at the time of triggering is 2 or more. In other words, an increase in progesterone may have a negative effect on the endometrium of the cycle.

Even in our hospital, only a limited number of cases are transplanted with fresh embryos. There are still many people who want to transplant as it is in the fresh cycle and get pregnant early, but especially when there are many developing follicles, it seems better to freeze once and transplant to a different cycle so as not to worsen ovarian hyperstimulation syndrome.

◆ Due to advanced maternal age, I was sure my situation was hopeless, but I was able to give birth to a healthy baby, and now I feel happy every day. I am really grateful to all the doctors and staff. Thank you very much. [-E]

◆ After giving birth safely, I am now spending my busy days in the midst of childcare. It's often difficult, but I've managed to do my best to be healed by the smiles of my children. I am grateful every day for the efforts and support of the doctors, nurses, and staff who took care of me at Oak. In particular, I cannot thank Dr. Taguchi enough for making speedy decisions and producing results, and Dr. Hayashi for empowering me with gentle words. I'm really thankful to you. [-S]

The Japan Society of Obstetrics and Gynecology has announced a clinical research plan to be implemented in 100 groups by 2017. The target audience is limited to 50 couples aged 35 to 42 years who have had two or more miscarriages and 50 couples who have not been pregnant three or more times by in vitro fertilization.
From this study, the pregnancy rate and miscarriage rate will be compared with those who were fertilized in vitro at the same time, and the results will be used as a reference to determine the number of cases in subsequent studies.

A research team at Tokyo Medical and Dental University has confirmed that a gene called Sox17 does not work sufficiently in the endometrium of mice, which is one of the causes of implantation failure.

When the number of implantations of fertilized eggs was examined, the average number was 8.3 in normal mice, but it decreased to 1.5 in mice in which the expression of this gene was insufficient.

The detailed mechanism is not yet known, but if the mechanism is known, it is expected that it may lead to an improvement in the pregnancy rate of infertility treatment.

In vitro fertilization is performed by injecting it together with sperm into the egg of the person who took it out separately. We aim to increase the probability of fertilization and pregnancy rate by transplanting mitochondria, which has been carried out more than 200 times in Canada and Turkey, and more than 20 people have given birth.