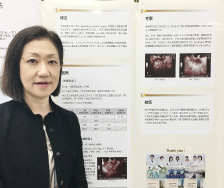 "Cases of POF leading to pregnancy during Kaufmann therapy"

Use of hyaluronan in the selection of sperm for intracytoplasmic sperm injection(ICSI): significant improvement in clinical outcomes-multicenter, double-blinded and randomized controlled trial
K.C.Worrilow,USA Human Reproduction,Vol.28,No.2
pp.306-314, 2013

In vitro fertilization was devised to ensure that the egg and sperm meet. However, when the number of sperms is low, or when in vitro fertilization does not result in fertilization, one sperm is selected for microinsemination. Intracytoplasmic sperm injection puts sperm into the egg, so it is important to choose good sperm with normal DNA. Sperm are selected in normal form and with good straight-line motility, and there are other methods of selection by IMSI and HBA (hyaluronan-bound). This is a paper on the usefulness of using hyaluronan for sperm sorting when performing ICSI.

During fertilization, the granulosa cells and zona pellucida around the egg are thought to play an important role in sperm sorting. Therefore, it has been reported that if you make hyaluronan gel and collect sperm attached to it, you can collect a lot of sperm that are mature and have no DNA damage, and we also use it as a "hyaluronic acid selection method".

In this paper, for 802 couples who require ICSI, sperms classified as normal (more than 65%) or decreased (65% or less) by the HBA test (rate of sperm attached to hyaluronan) are classified as normal ICSI. We are investigating how embryonic development and pregnancy results differ with ICSI combined with hyaluronic selection.

◆After being treated for two years at another hospital, I was ready to give up, but at Oak Clinic I got pregnant in less than a year. Unlike the prior hospital, I felt great peace of mind at Oak Clinic, and could have my daughter. Even though it was inconvenient and far away, it was a great decision. Thank you very much. (-T.)

The Japan Cancer Treatment Society has announced that it has begun to create guidelines for cryopreserving eggs and sperms of cancer patients before treatment.

Originally, the risk of infertility increased due to the effects of anticancer drug treatment and radiation therapy, so efforts to freeze eggs and sperms before treatment were widespread in the medical field. However, since it is said that information such as the risk of infertility due to cancer treatment is not sufficiently communicated to patients, we decided to start making guidelines.

It is planned to be shared with medical institutions nationwide in two years. This guideline seems to include information on the organs that have cancer, the risk of infertility for each treatment method, and the age suitable for collecting eggs.