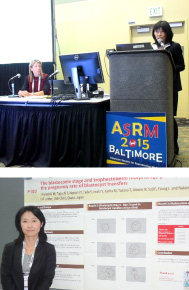 Can AMH be used as a marker to determine the probability of pregnancy in counseling prior to IVF with ovarian stimulation?

Since AMH is secreted by the granulosa cells of follicular follicles, it can be expected that when AMH is high (but not too high), a large number of eggs can be obtained by egg collection. As a result, the number of embryos that can be transplanted will increase, and the acquisition rate of live babies in one egg collection cycle will increase. In other words, the idea is that the pregnancy rate increases as a result of the correlation between AMH and the number of developing eggs.
Does high AMH correlate with pregnancy rate, i.e., egg quality? It is still controversial at present.
In the second paper, in order to predict the birth rate in one egg collection cycle, the birth rate prediction is made by adding AMH and AFC and both to the basic factors of cause, pregnancy history, BMI, and age.
Adding AMH to the underlying factors provided the most accurate prediction. This is probably because high AMH increased the number of embryos that could be transplanted and increased the cumulative birth rate. Also, regarding BMI, this paper states that high BMI affects egg quality. Certainly, there are many unsuccessful repetitive people who have succeeded after losing weight on a two-month Oak diet for unknown reasons. (Excerpt)

◆ The doctor told me it’s harder to get pregnant than to be pregnant, but then I had terrible morning sickness and it took me two days to give birth! Childcare is easier than that. The child is cuter than I imagined, and my husband, who was against in vitro fertilization, also loved me and took care of me and was happy in the end that we did this together. I'm grateful that I could take a break from the company for this.

In addition, when the day and night time was adjusted to 1: 1 using lighting, the symptoms improved and the pregnancy efficiency recovered to the same level as the wild-type mouse. Since humans also have a biological clock, it can be said that regular living can be one of the fertility activities.

There is growing interest in Japan for the practical application of pre-implantation screening, which is recognized as China and South Korea in Asia as well as in the United States and European countries.

Pre-implantation screening has led to improved mental stability, as fertility treatment in old age has a high miscarriage rate even during pregnancy.

Currently, the Japanese Society of Obstetrics and Gynecology seems to be planning a clinical study to verify whether pre-implantation screening has the effect of lowering the miscarriage rate. Various clinics are looking into it now.