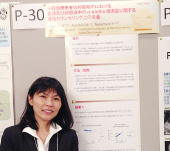 I attended the conference and made a presentation.

Predictability of AMH by antagonist method

When stimulating the regulated ovaries by in vitro fertilization, a regulated stimulus that matches the individual's reactivity is desired.

One reason is to prevent OHSS (ovarian hyperstimulation syndrome). The other is to avoid low response.

We investigated the number of follicles at the time of the first IVF using the cetrotide method of 487 people performed between 2006 and 2011, and investigated the correlation with AMH taken in advance. 4 to 15 eggs are considered to be the optimum number of eggs, 3 or less are considered to be low responders, and 16 or more are considered to be high responders. AMH was the most correlated in terms of egg collection, age, BMI, and AMH. Furthermore, the combination of AMH and BMI made it possible to make a more accurate judgment. Also, AMH was able to more accurately point out high response than low response. (Excerpt)

At what age is it economically effective to freeze eggs?

Unlike Japan, the United States is world-famous for its high medical costs. The same applies to reproductive medicine such as in vitro fertilization and egg freezing. Therefore, in vitro fertilization often uses two or three embryos in order to increase the success rate at one time, so the cost of NICU for preterm birth of twins is a problem. Therefore, in the United States, it is often announced that pre-implantation screening and returning one embryo with normal chromosomes is the most efficient, and is the way to achieve results while keeping costs down.

This time, we looked at what age women aged 25-40 years old tried to get pregnant, and if they did or did not freeze their eggs, 3 years, 5 years, and 7 years later, did they get the results? Also, a model was made from various statistical results to calculate how much it cost at that time.
According to the report, the most cost-effective egg freezing was at 37 years old, when the egg was frozen at 37 years old and trying to get pregnant at 44 years old 7 years later, it cost $ 12,910 at a birth rate of 51%. Seven years after the egg was not frozen, the birth rate was 21.9% and it was $ 2,111 more. And no matter how old they were after 32 years old, there was a difference of 10% or more in the birth rate 7 years later.

there was a difference of 10% or more in the birth rate 7 years later. The problem is that the statistical model is too simple, and lacks data on infertility patients and data about people with low ovarian reserve, but it seems to be useful as one piece of data. (Excerpt)

◆ After suffering for ages with infertility, Oak Clinic was my last chance. The fact that it all worked out still feels like a dream. My daughter is a very cute girl who is full of energy and has no noticeable obstacles so far. I'm really thankful to you. There are still 3 frozen fertilized eggs, so you may be able to take care of me again.

◆I visited the doctor for the first time in January 2014 and was really lucky to be able to give birth one year later. I was surprised at the age of 45 when I was pregnant and at the age of 46 when I gave birth. Although it is physically difficult, I am working hard to raise my child while feeling happy every day. I am grateful to the doctor and the nurse. Thank you very much.

Research groups such as the Institute of Physical and Chemical Research have announced that the increase in the frequency of miscarriage and the birth of children with Down syndrome as age increases is thought to be mainly due to a decrease in cohesin (a protein that connects chromosomes in the egg).
It is known that cohesin decreases as the egg ages, and it is believed that the lack of cohesin causes abnormal distribution of the egg's chromosomes. We will continue our research to find out why cohesin decreases with age, said the team leader of the research group.

Professor Saito of Kyoto University and others have succeeded in producing primordial germ cells, which are the source of sperms and eggs, from human iPS cells. In the future, if it becomes possible to produce sperms and eggs in vitro, it will help clarify the mechanism by which parents give birth to children.
In the future, we plan to develop technology for making human sperms and eggs, but since the Ministry of Education, Culture, Sports, Science and Technology prohibits experiments to fertilized eggs made from human iPS cells, Professor Saito said, "Proceed with fertilization experiments. Social debate is needed to see if it is okay. "