Uterine fibroids are benign tumors that form in the walls of the uterus. Although benign, they can suddenly grow or increase in number in a short period of time. It is believed that one in three women in their 30s and 40s has uterine fibroids. They are divided into the following three types on direction of growth.

Submucosal fibroids especially can cause implantation failure, due to deforming the lumen of the uterus. The pregnancy rate by IVF and embryo transfer can be improved by removing these fibroids with hysteroscopic surgery. Implantation rates are low even in patients with intramuscular fibroids, but unfortunately, surgical removal of intramuscular fibroids generally do not improve results.
Subserosal fibroids have not been shown to interfere with implantation. However, for intramuscular fibroids and subserosal fibroids, little is known about how factors such as the number, size, and location of fibroids may affect pregnancy. (Pritts EA, et al. Fertility And Sterility 2009, Vol 91, p1215–1523.)。
With fibroids, it is important not to jump to conclusions and to plan carefully, as surgery can also impact future pregnancies. 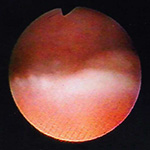